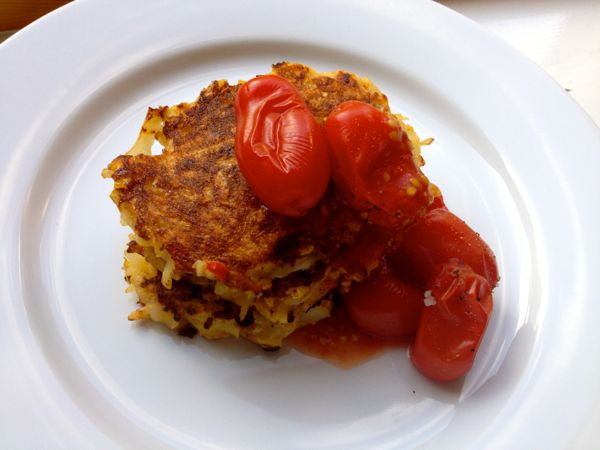 I have to admit that boxty wasn’t something I ate as a child. Popular in Monaghan and Leitrim, it’s a type of potato pancake made from grated potato, but it was so alien to me as kid, I basically thought it was made up until I was older. I first saw it as a real thing in my beloved potato bible The Humble Spud and I’ve been meaning to make it for years, but I disappeared down the tangent of rosti instead and forgot to back up until recently.

Half of you are probably lost by now. Isn’t a potato pancake just a potato pancake I hear you cry? Well, no, rosti are made with semi cooked grated potato with a high starch content, mixed with onion and fried on each side in butter and is eaten as a savoury side dish. Boxty uses raw grated potato before being fried and can be sweet or savoury. Potato farls are made with mashed potato before being cooked on a griddle and then often fried until golden. And I’ve never yet made a latke, but I’ll bring you breaking news about them when I do…

Some recipes for boxty use mashed potato in with the grated spuds but I thought I’d some pureed fresh corn instead since I have tonnes left over from a recent Brixton Bugle recipe. Combining corn and potato gives a autumnal feel and a taste of Brixton which I thought I’d enhance by adding some chopped Scotch Bonnets, fresh coriander and lime. I then served it with some grilled tomatoes for a really good brunch.

Begin by preparing your potato. Grate it on the widest hole of a box grater into a clean tea towel. Gather the sides of the tea towel up and twist it tightly to squeeze out the excess liquid and starch. The potato will begin to discolour almost instantly, but don’t worry. Squeeze the potato as dry as possible and leave to sit for a few minutes in the tea towel.

If using fresh corn, pull the green husks and the white silks away from the kernels of corn. Cut the top and the bottom of the ear of corn off and then run a very sharp knife down each side to strip the kernels away. Put them in a dish or bowl and puree with a handblender until loose in texture. Leave a bit of texture if you can.

Put the potato and the pureed corn into a bowl together and use the blender again to carefull chop your Scotch Bonnet chilli. These squat little peppers are very hot and if you touch them with your bare hands, bits of you will tingle so the blender is the best bet here. Add the chopped chilli into the corn and potato along with the lime zest and chopped coriander.

Stir in the flour and the baking powder. Spelt or gluten free flour works fine here if you need it. Bring it all together into a loose batter with the milk. Non dairy ones would be fine but I used good old semi skimmed. Season well. Heat the the oil in a pan on a medium low heat and add a heaped dessertspoonful of the batter to the pan. Flatten out slightly and cook on each side for about 2 minutes until golden brown. Repeat until all the batter is used.

Serve the boxty in a stack with some grilled tomatoes on top and a drizzle of the juice from the zested lime and a bit more chopped coriander if you have it (I’d run out.) The corn makes the pancakes slightly sweet and goes well with the chilli and the slightly crunchy potato and these were really good. I ended up having them for both breakfast and dinner as the batter goes a long way and I enjoyed them both times. I think I have a new potato based dish in to add to my already extensive collection. 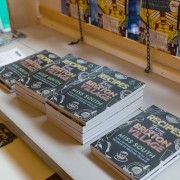 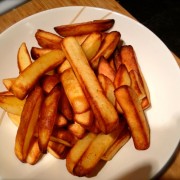 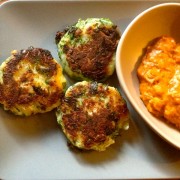 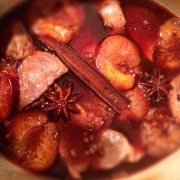