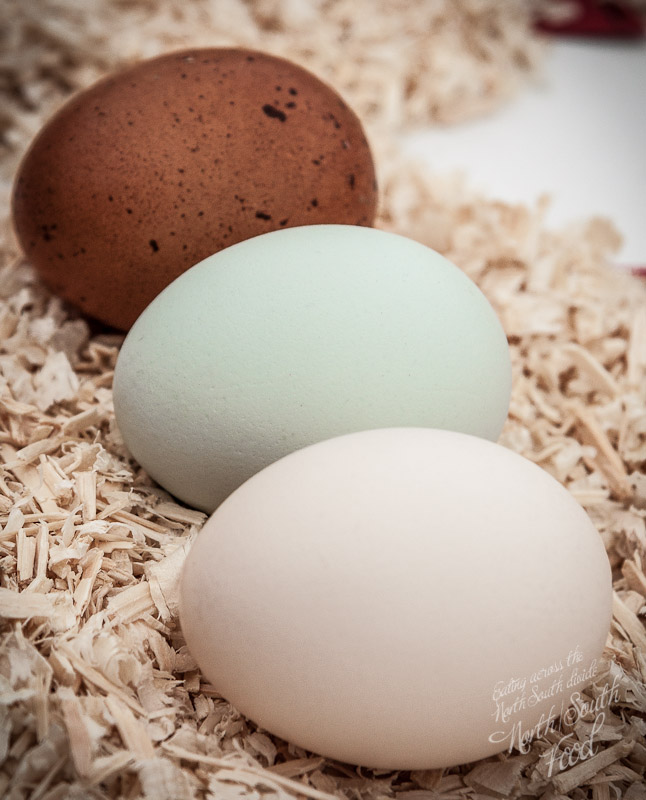 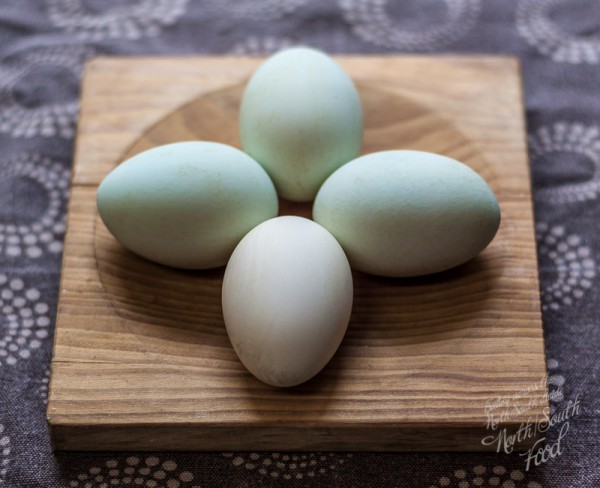 So that moveable feast, Easter, is well and truly behind us for another twelve months or so. It’s a time of the year which is synonymous with eggs – as a symbol of life, of change, as a treat or gift, and as the rebirth inherent during spring. Our modern Easter is a convenient, contradictory and sometimes conflicted mélange of pagan, Christian, and (increasingly) consumerist influences; and there’s plenty of scope for debate about the origins of many of the things we associate with this time of year. Sidestepping much of the ideology and etymology, I’d just like to talk about eggs…*

Actually, it’s hard to think of a more elemental, universal and iconic foodstuff than an egg. Considering eggs (and duck eggs in particular) are one of the favourite and most-used ingredients in my kitchen, it surprised me to realise we’ve never written a piece in praise of them.

They crop up in plenty of our recipes; they’re the first thing I buy when I go to the market each week; they’re my number one packed lunch item (the ultimate self-contained foodstuff). So this is a celebration of eggs, and especially the duck egg, which is indelibly wrapped up in my past memories and modern routines. 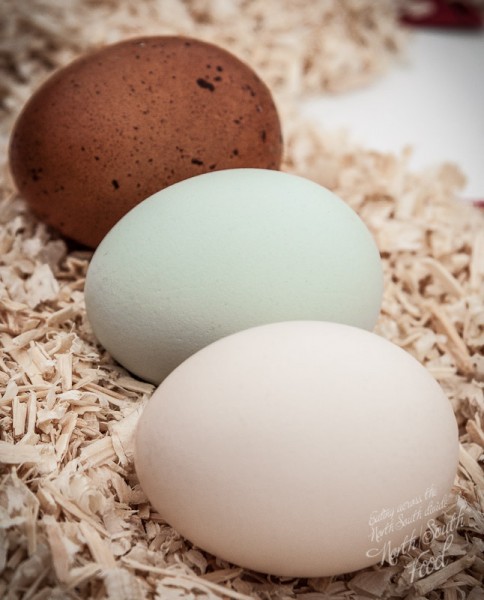 The delight of a duck egg is rooted in our childhood. I don’t remember seeing them for sale (although I can’t claim to have been doing the family shopping so I might be wrong) but I do remember the thrill when they appeared in our kitchen occasionally, especially at this time of year. Hen’s eggs were run-of-the-mill, but tiny bantam eggs and larger duck eggs were exotic and exciting by comparison. Several family friends and distant relations kept fowl in their farmyards, and there was always something particularly special when we were given those chalky white or soft greenish blue eggs. Bigger and with thicker shells than a normal hen’s egg, they were perfect for this time of the year, when thoughts turned to decorating them.

Although we weren’t impervious to the temptations and pleasures of chocolate Easter eggs, my main memory is of blowing and painting real eggs. Coming from an art and craft-enfused family, we were always encouraged to paint, draw and otherwise decorate empty egg shells. The tricky task of blowing the eggs without breaking or exploding them was left to our parents, who’d huff and puff to magically extract the contents into a bowl. Then we just needed to break out the paints or felt-tips, vying to compete with the imagination and quality of our parents, while the yolks and white were used for cooking. We seemed to eat a lot of scrambled eggs and carbonara around Easter time…

I don’t remember rolling the decorated eggs, although that’s a tradition elsewhere in the British Isles it wasn’t something we did (blowing the eggs, rather than hard-boiling them, means they’re much better suited to display than racing). Although I’d not heard the term until I moved here, egg-rolling is also know as ‘Pace-egging‘ (derived from from Pace / Pesach) and it’s a tradition strongly rooted in the North of England. In the nearby hill top village of Heptonstall, a few miles from where I live, Good Friday heralds the famous Pace Egg Play. The actors wield swords during their ancient play (and pints between performances) and no longer receive the boiled eggs from which their name derives, but it’s another reminder of the connection between eggs and Easter. 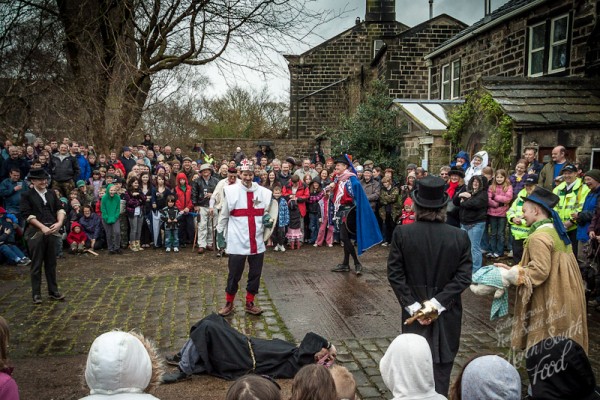 Also close to home, Incredible Edible Todmorden has encouraged the sale of locally produced eggs in Calderdale (see their egg producer map online) and most of the eggs I buy come from only a few miles away: they’re fresh, traceable and free range. I’ve being buying duck eggs regularly since I moved here: when living in Manchester they were an occasional treat, purchased from a good butcher, fishmonger, or a farmer’s market. Now they’ve become a kitchen staple… to the extent where I’ll often have duck rather than hen’s eggs in the house.

Over the Easter weekend market traders and butchers in Todmorden all had more exotic varieties of eggs in stock – pointed, speckled turkey ones, and gigantic smooth white goose eggs – heralding the seasonal delights of spring. I spent Easter Sunday introducing my godson to the creative and comedic pleasures of blowing and decorating a goose egg. However unlike turkeys and geese, ducks lay all year round, so there’s rarely a time when I’m not able to source them.

With their slightly translucent shells, the rich creamy yellow yolk, and their deeper flavour, they’re pretty and so good to cook with. Many bakers swear by them for the extra lightness and lift they give to cakes and buns. However, if they’re so good, why don’t more of us eat them? Surely they should be an essential in the kitchen of every good cook?

I used to think it was simply an issue of availability or awareness, but a deeper reason is due to a health scare in the UK after the Second World War. As duck egg shells are more porous then their hen counterparts, they’re more susceptible to salmonella infection, so need to be cleaned well and kept cool. In fact, the scare was rather unjustified, but tarnished the reputation of these wonderful eggs for decades. That, and the rise of industrial farming and the demands of supermarkets for uniformity, all limited the market for duck eggs. Thankfully, that’s slowly changing as people rediscover their benefits, and the rise in responsible farming techniques and better awareness of hygiene and food health means the duck eggs which are on sale are likely to be fine.

They’re still not the easiest to find, but if you look hard you should track them down. Try farmer’s markets, or good butchers. On the odd occasion I’ve not been able to make it to the market, some supermarkets sell duck eggs. I’ve seen them in Waitrose, Morrisons, Sainsburys, Marks and Spencer and Booths. I’d pay around £1.50 to £1.80 for a half dozen at the market up here; they’ll be somewhat more in the shops.

Miss South has more difficulty tracking them down in south London, but advises they’re available at the wild boar stall at the Farmer’s Market, Brixton Cornercopia are due to start stocking them… and of course the well-known Duck Egg Café on Coldharbour Lane is an always reliable source for these beauties. You’ll often pay a premium in the big smoke for duck eggs, but they’re certainly worth it as a treat. So get cracking… you owe it to yourself to find out for yourself why duck eggs are smashing!

Finally, ‘duck egg’ has long been our most popular search term here on North/South Food: in part (with a few honourable exceptions) because there’s not much info about them online; in part due to programmes like the BBC’s Great British Food Revival piquing the interest of the public; but mostly due to the popularity and interest in the Duck Egg Café which Miss South reviewed just after it opened. 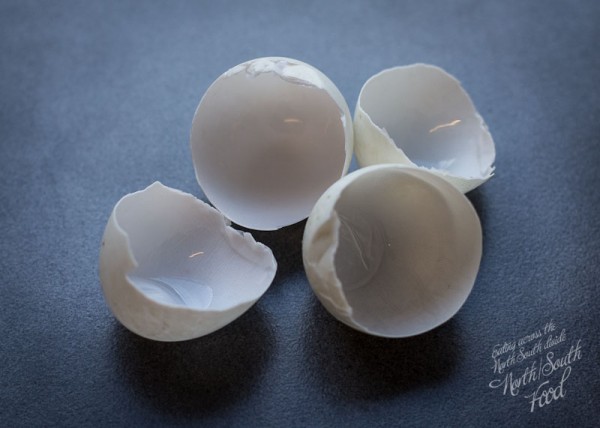 * And not a single dodgy egg pun in sight! 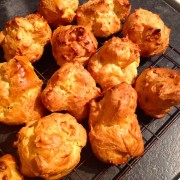 A taste of home?

All Boar, No Bore… 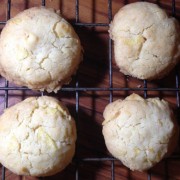 Tapas to light up your life: El Gato Negro at Guestrant