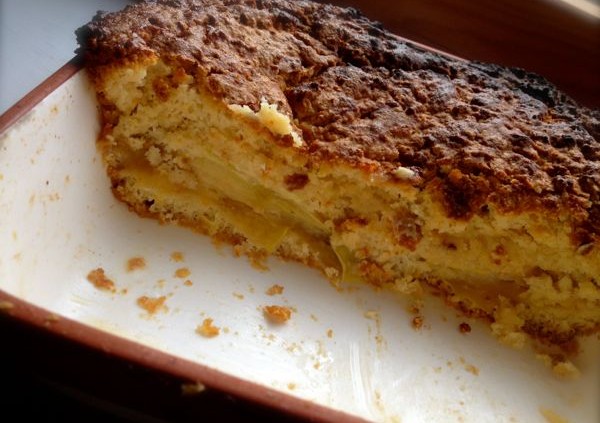 I know most people go to book group as an excuse to drink wine and possibly read Fifty Shades of Grey, but the one I go to has ended up being much more highbrow than that (we’ve never read Fifty Shades and I had spare bottles of wine after the last one.) It’s introduced me to books and people I didn’t know and taught me a lot along the way. It was constructed from a group of us on Twitter who had all read The Guernsey Literary and Potato Peel Pie Society and had not entirely positive feelings about it.

On the suggestion of the Guernsey native in the group, we went for something much more authentic and less whimsical and read The Book of Ebenezer Le Page instead. We ate Guernsey’s national dish of bean jar (a recipe I shamelessly appropriated for Slow Cooked) and put the world to rights. Sadly we haven’t found much other literature from the Channel Islands to read since then, but I thought it would be fun to hark back to Guernsey’s charms for this week’s get together and try making gâche melée for dessert.

Almost like a cake made with suet instead of butter, gâche melée is filled with apple and differs from the similarly named gâche which is more like a tea bread like barmbrack or bara brith. Gâche melée is an excellent vehicle for Guernsey’s famous cream and allows non Guernésiais speakers to try and get the pronunciation right as they eat. It should be as close to gosh mel-aah as you can get (which isn’t very in my Belfast accent.) Or you can just keep your mouth too full with its loveliness to say much.

Before I go any further, I should say that every single recipe for Guernsey gâche melée varies from cook to cook and there are arguments about which is authentic so I’ll declare now that mine probably wouldn’t impress a Guern granny who has made millions of them, but my friend did congratulate it and we wolfed it down. I’ve copied the recipe from a postcard sent from Guernsey but added the eggs because I didn’t have enough milk or the inclination to go out and buy any.

Start by peeling and coring your apples. I used Bramleys for mine but I actually think something that cooks quicker would be better as mine were still a bit firm for my liking. I might use a Braeburn in future. There is debate in Guernsey as to whether one should slice or cube the apples. I sliced mine because it’s quicker and I hadn’t realised the controversy until afterwards. Scatter 50g of the sugar over the sliced or cubed apples.

Grease a deep, preferably square, dish or baking tin well with butter. Some Guerns say that ceramic or Pyrex dishes make the bottom of the gâche melée soggy and it must be metal to get the best finish, but I was already using my only square tin so I ignored that gâche melée rule as well.

Put the flour, 300g sugar, suet and salt in a large bowl. Crack the eggs in and add the milk and vanilla, stirring it all together. It will make a firm but sticky dough. Press half of it in your dish, making sure it is fairly evenly into the corners and then lay the apple on it. Cover them with the remaining dough to make a apple and dough sandwich. Sprinkle the remaining 50g sugar over the top. Handle the dough very lightly to stop it becoming heavy during cooking.

Bake immediately at 180°C for 1 hour 30 minutes. The dough will rise so don’t do what I did and shove it onto the top shelf while cooking a lasagne below so the top burns slightly. Allow it room to rise and don’t cover it while it cooks. Check it after 90 minutes with a skewer and give it an extra 15 minutes at 200°C if it looks pale or the apples don’t give nicely in the centre.

Let it cool for about 15 minutes and serve it in hefty slices with a dollop of good rich Guernsey cream. It should have a nice crisp top and soft fluffy texture from the suet. It is also very good eaten completely cold for breakfast the next day if you have any leftovers. In fact, speaking of cold, it’s excellent for fortifying you in this chilly snap too…